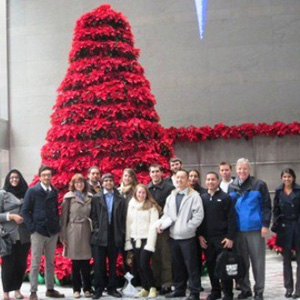 The inaugural class of Lloyd Gardner Fellows set the standard for years to come: visiting the United Nations in the fall and Washington, D.C. in the spring, scholars were exposed to the work that takes place on both a global and national level to address issues of democracy and human rights.

Highlights from the Inaugural Class of Lloyd Gardner Fellows, 2013

The inaugural class of Lloyd Gardner Fellows had a busy semester! The seminar featured numerous speakers from the advisory committee and from across the university. Additionally, the seminar hosted distinguished outside speakers.

It was a fascinating and fulfilling day, and one that allowed the class to see how the international community thinks about and addresses issues of democratization and human rights.

In March, the students visited Washington, D.C. The first day of the trip included a tour of the Library of Congress, a behind-the-scenes tour of the U.S. Capitol with staff from Senate Majority Leader Harry Reid's office, a meeting with Senator Reid (first image), and a meet-and-greet with Rutgers alum. On the second day, we had breakfast with Representative Rush Holt (NJ) in the Member's Dining Room, visited the headquarters of USA Today for a panel discussion about politics and new media (second image), and then returned to Capitol Hill for a lunch with the National Automobile Dealers Association and then a meeting with Senator Robert Menendez (NJ) in the US Senate Committee on Foreign Relations Conference Room (third and fourth images).

This visit to Washington, DC exposed the fellows to the wide variety of work that takes place in our nation's capital. From meeting with members of the House and Senate to journalists and lobbyists, the fellows left DC with a sophisticated understanding of the intersection between democracy and governance.

In the spring, the fellows also transitioned from seminars to independent studies, where they each work with a faculty mentor to develop a policy proposal. The work on independent studies culminated in the first annual Gardner Fellows Policy Conference, held on May 7, 2013.