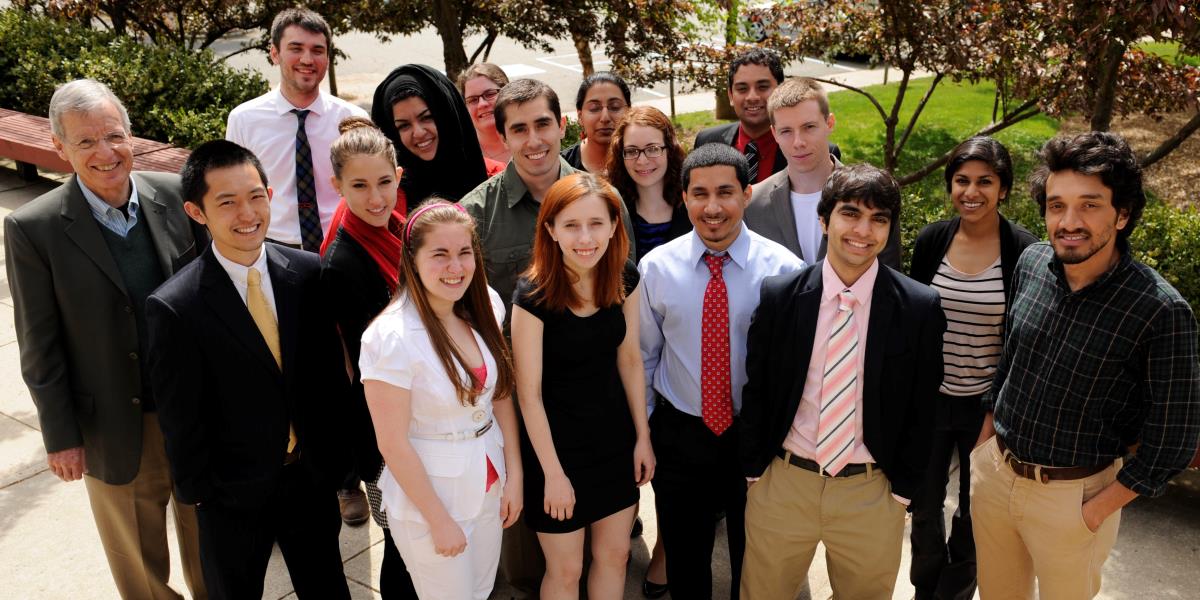 Abdul Rehman Khan didn’t quite know what to expect.

He was one of 15 School of Arts and Sciences students selected for a new fellowship that promised to prepare students for lives of service and leadership by grounding them in critical global issues.

“This was completely new, so my expectations were very measured,” he said.

But as the Lloyd C. Gardner Fellowship Program in Leadership and Social Policy began its inaugural year in the 2012-2013, Khan said he knew he was in for an extraordinary academic experience.

For where else could students encounter the likes of Alexis de Tocqueville and Walt Whitman; discuss Arab Spring and the French Revolution; travel to Washington and the United Nations for meetings with policy makers, and all the while being part of a small, close-knit community of learners?

Although the first class convened last year, the Gardner fellowship actually has deep roots at Rutgers. Indeed, the vision goes back to the 1964-1965 school year when undergraduate John Adams enrolled in the Recent American History course with Professor Lloyd Gardner.

It was a pivotal era. The conformity of the 1950s began to give way to the upheavals of the 1960s. Adams, who went on to become a lawyer and financial investment firm executive, recalled how Gardner challenged students to think for themselves.

“He taught us not to accept without some skepticism the assumptions we carried out of the 1950s,” Adams said recently. “He required us to look at issues rigorously and analytically.”
“He didn’t want us to settle for ‘my country right or wrong.’ He wanted us to ask ‘are we doing the right thing?’ ”

Gardner, now a professor emeritus with a long and distinguished career at Rutgers, continued to exert a hold on Adams. For at the age of 59, Adams, possessed of bold ideas, left finance for academia. He created the concept for the Gardner fellowship and provided an endowment to SAS to get it up and running.

“I wanted a program in which exceptional students would be challenged just like we were,” Adams said. “The goal was to provide a small environment where students could vigorously explore issues and address them with fresh perspectives. And, upon graduation, enter their adult lives with a sense of responsibility and provide leadership that our country so badly needs.”

I wanted a program in which exceptional students would be challenged

Adams got his wish.

Dennis Bathory, a political science professor, served as fellowship director, leading students—all SAS juniors – through a rigorous program that examines democracy and democratic revolutions through multiple historical, theoretical, and philosophical angles, as well as through a series of guest lectures from scholars, diplomats, and government officials.

Yet the syllabus alone can’t convey the unique group dynamics of the fellowship, Bathory said.

“It’s built on discussions, interaction, and lots of different perspectives,” Bathory said. “For upper-level undergraduates, there is nothing like that exchange because it gets them to think in each other’s terms rather than simply listening to the faculty member or sitting in courses that are skirting around their major interests.”

“There is something about being in a room with a lot of people as smart, or smarter than you, and just being able to learn from them,” he said. 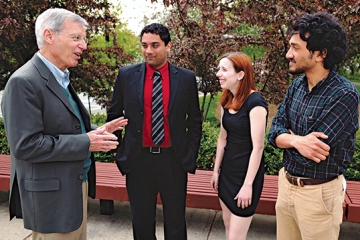 “We had really thought-provoking discussions about what it means to be a good citizen, and how important civil society is,” Alexandra E. Jubb said. “It felt like a real community where we could really talk about things.”

The readings, discussions, lectures, and independent research culminated at the Gardner Fellows Policy Conference in May where students presented their final projects.

The projects ranged from Khan’s examination of policy options for the much-maligned “graffiti wall” in New Brunswick to Jubb’s position paper on U.S. intervention in Syria to Aniket Kesari’s look at the evolution of human rights litigation.

All told, the projects examined critical and often contentious policy issues, from the local to the international, and offered perspective, context, and solutions.

Lloyd Gardner, sitting in the audience alongside Adams, watched the conference with approval.

Gardner explained that his intellectual roots were formed at the University of Wisconsin-Madison, where a plaque famously declares the university’s support for the “continual and fearless sifting and winnowing by which alone the truth can be found."

“My professors pushed the idea of being more than just an academic sitting in an ivory tower,” Gardner said. “You have an obligation to speak out on things, and to participate fully in the life of the university and in the larger community.”