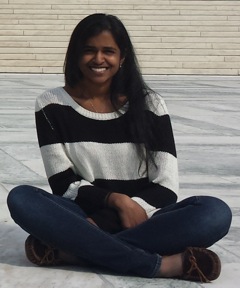 Madhuri Swarna is pursuing a double major in political science and philosophy, and a minor in psychology. She is a proud member of the Douglass Residential College and the School of Arts and Sciences SAS Honors Program where she is an SAS Honors Peer Mentor. Madhuri is a recipient of the Academic Excellence Award for 2014 and the Rutgers College Class of 1925 Scholarship. Madhuri, in hopes of having a career in law, is an active member of the Rutgers Mock Trial Association, a competitive organization designed to promote public speaking, analytical, and other skills that will ultimately let her succeed in the legal field. Madhuri was the Team B captain for the 2013-2014 season, and is the 2014-2015 secretary. In addition to mock trial, Madhuri is also a member of the Peithessophian Society, a historic Rutgers organization dedicated to promoting inter-disciplinary debate and discussion among its members. She is currently working with Professor Paul Poast in the Political Science Department coding treaties for the World Treaty Index.